In the upcoming Eifel Grand Prix at Germany’s historic Nürburgring, a win for Lewis Hamilton would see him draw level with Michael Schumacher at the top of Formula 1’s all-time win list. With a record-equalling seventh world title in Hamilton's sight, it’s a debate that continues to rage on; just who is better… Schumacher or Hamilton?

It's unlikely we'll ever get a definitive answer to that one in our lifetime, and you can bet your last dollar as long as there's an internet comments section somewhere, people will argue over this for the rest of time. But what we can do is take a closer look at how these two great drivers' F1 careers compare.

Perhaps the most surprising thing of all in this debate is how inevitable it now is that Hamilton will end his career as statistically Formula 1's greatest ever driver. That's not an opinion; it's a fact. Statistically, he'll stand alone by the time he hangs up his helmet in a few years - whether you'd rate him as the best is up for debate, but statistically, he will eclipse almost all of Schumacher's F1 records in the coming years.

To put into context how extraordinary that is, you have to remember how dominant Schumacher's career stats were when he first retired in 2006 while still at Ferrari.

Prior to his 1991 debut, the 'Formula 1's all-time greatest' debate centred mainly around 1950s legend Juan Manuel Fangio and the sport's most bitter rivals of the 1980s, Alain Prost and Ayrton Senna. Senna and Prost amassed 92 F1 wins between them during their careers, but by the time Schumacher retired, he'd won just a single race fewer than the legendary pair combined.

Realistically, few people thought Schumacher's numbers would ever be broken; after all, it took 46 years for anyone to surpass Fangio's record of five Formula 1 drivers' titles.

Surprisingly, Schumacher and Hamilton's F1 statistics are remarkably similar, and there are quite a few crossovers regarding the way in which their careers panned out. To make our comparison a little fairer, we'll pitch Hamilton’s stats against Schumacher's up to the end of 2006, his final race-winning season in Formula 1. 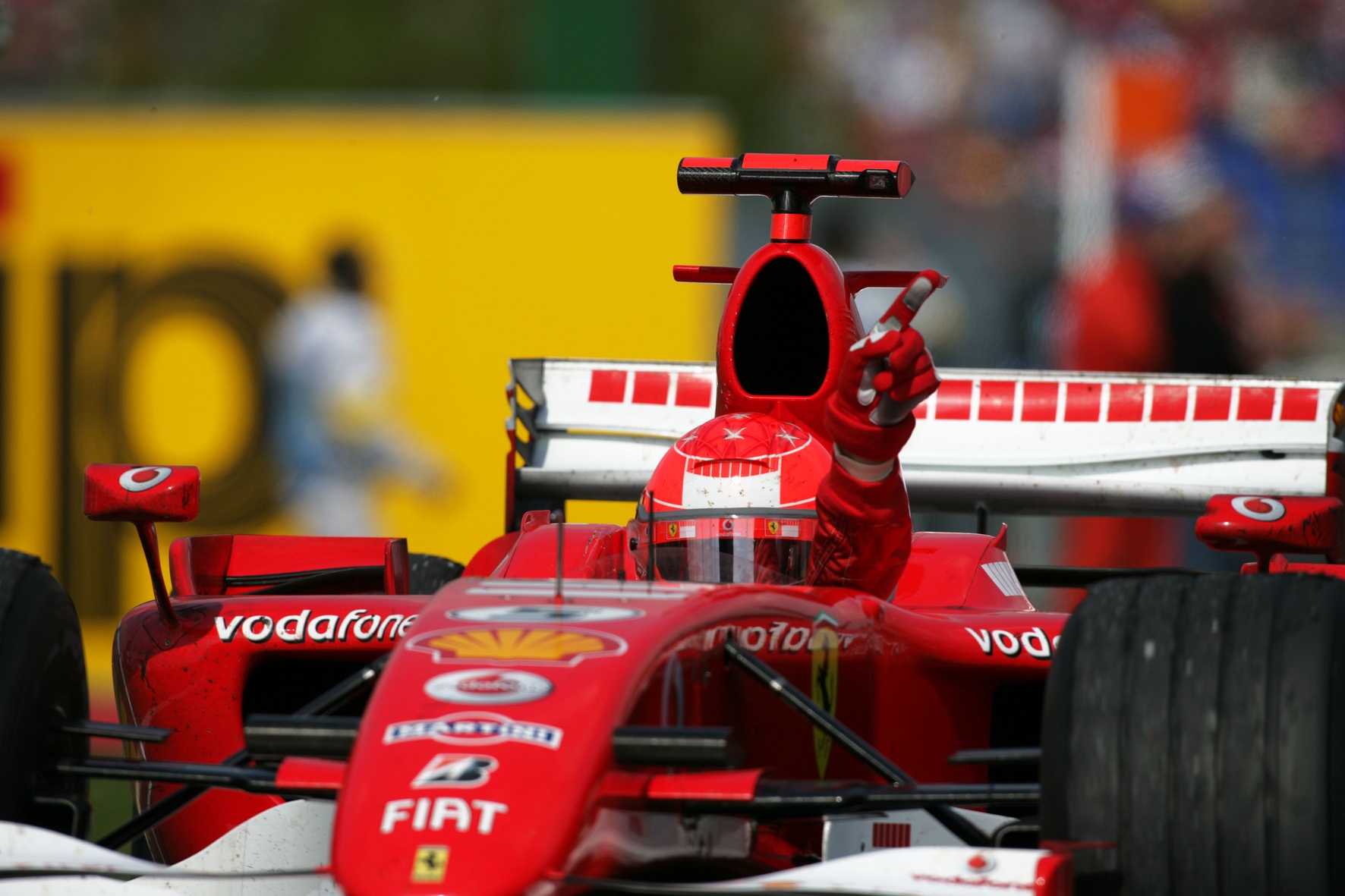 There are a few immediate similarities between Schumacher and Hamilton that add some fascinating context to the stats discussed here. Both were aged 34 when they won their sixth F1 title, and both did so in their 13th season.

Perhaps more fascinating, however, is that both won championships with independent teams first (Benetton in Schumacher's case, Hamilton with McLaren) before moving on to rebuild an underperforming manufacturer team that had experienced limited recent success.

Excluding his less-successful spell with Mercedes from 2010-2012, Schumacher achieved his 91 grand prix wins from just 249 starts - an astonishing 36.5% win ratio. Hamilton, in comparison, amassed his equally impressive tally of 90 wins from 260 starts - a ratio slightly behind Schumacher's, but still far ahead of almost anyone else at 34.6%.

Between them, they've won close to 18% of all F1 races ever held.

The majority will remember both as all-time greats, but there are still some who point to each driver's dominance as being more to do with the cars they've driven than their skill behind the wheel.

History shows that winning grands prix is an extremely tough task unless you're driving one of the top cars on the grid, whatever era you're in. It's a simple fact of how motor racing works, but at the same time, the best drivers often end up in the quickest cars, and there's little coincidence in that. So how do we separate man from machine in this case?

To suggest that Schumacher and Hamilton owe their reputations to their machinery is a very simplistic view. Both drivers have indeed raced some of Formula 1's most dominant cars, but neither Ferrari (in Schumacher's case) or Mercedes (Hamilton) were at the top when these two joined.

Ferrari had won just two races in the previous three seasons before Schumacher's arrival and were without a world title win since 1976. Hamilton took a huge risk (and was ridiculed for it in some quarters) joining Mercedes in 2013, as they'd won just a single race in their three seasons back in F1 as a constructor, after more than 50 years away.

Some of the foundations for each team's future success would indeed have been laid prior to Schumacher and Hamilton joining; sufficient enough at least to convince them - both already world champions at the time - to leave their comfortable race-winning drives to embark on ambitious new projects.

But it's also fair to say that both drivers ultimately were crucial to their team's subsequent growth in the years that followed, and both drivers raised the competitive bar to new levels whilst at the same time motivating those around them to achieve their own personnel highs.

What were the key strengths then that made each driver unique?

At the peak of his career, Schumacher was considered the most complete driver on the F1 grid. Supremely quick in qualifying, he was rarely ever beaten by his teammates, and between 1991-2006 he started 27% of his 249 races from pole. On Sundays, the combination of Schumacher's skill and Ross Brawn's genius on the pit wall made Ferrari an unstoppable force. With the German's ruthless overtaking manoeuvres and razor-sharp consistency, he could make even the most ambitious of race strategies work in his favour.

Likewise, Hamilton's proven to be a supremely gifted racer over the past 14 years and holds the remarkable record of having won in every Formula 1 season he's raced. He's a match for anyone in wheel-to-wheel combat, and his intuitive feel for where to position the car in the heat of battle is an ability few possess. Perhaps his greatest skill though is his one-lap pace.

Ayrton Senna was, for a long time, regarded as F1's greatest qualifier, but Hamilton now stands alone in the record books with 96 pole positions to his name - almost 30 clear of Schumacher and his hero Senna.

Both Schumacher and Hamilton though are human, and like all humans, they have weaknesses.

Schumacher could, at times, show questionable judgement in the heat of the moment. At the 1997 European Grand Prix in Jerez, his deliberate coming together with title rival Jacques Villeneuve earned him disqualification from that year's championship, and nine years later he received further scorn in Monaco after stopping on track in order to compromise Fernando Alonso's qualifying lap.

Hamilton's weaknesses are perhaps not as pronounced as Schumacher's, or maybe it's that they have courted less controversy in comparison. On-track, it's hard to find too many instances where Hamilton has overstepped the mark or taken a driver out through an overambitious or overly aggressive manoeuvre.

Outside of the car, however, there have been one or two instances where drivers have been able to impair Hamilton's focus. Notably, with McLaren teammate Fernando Alonso during Hamilton's debut season, and the bitter feud that developed with teammate and (former) friend Nico Rosberg at Mercedes. 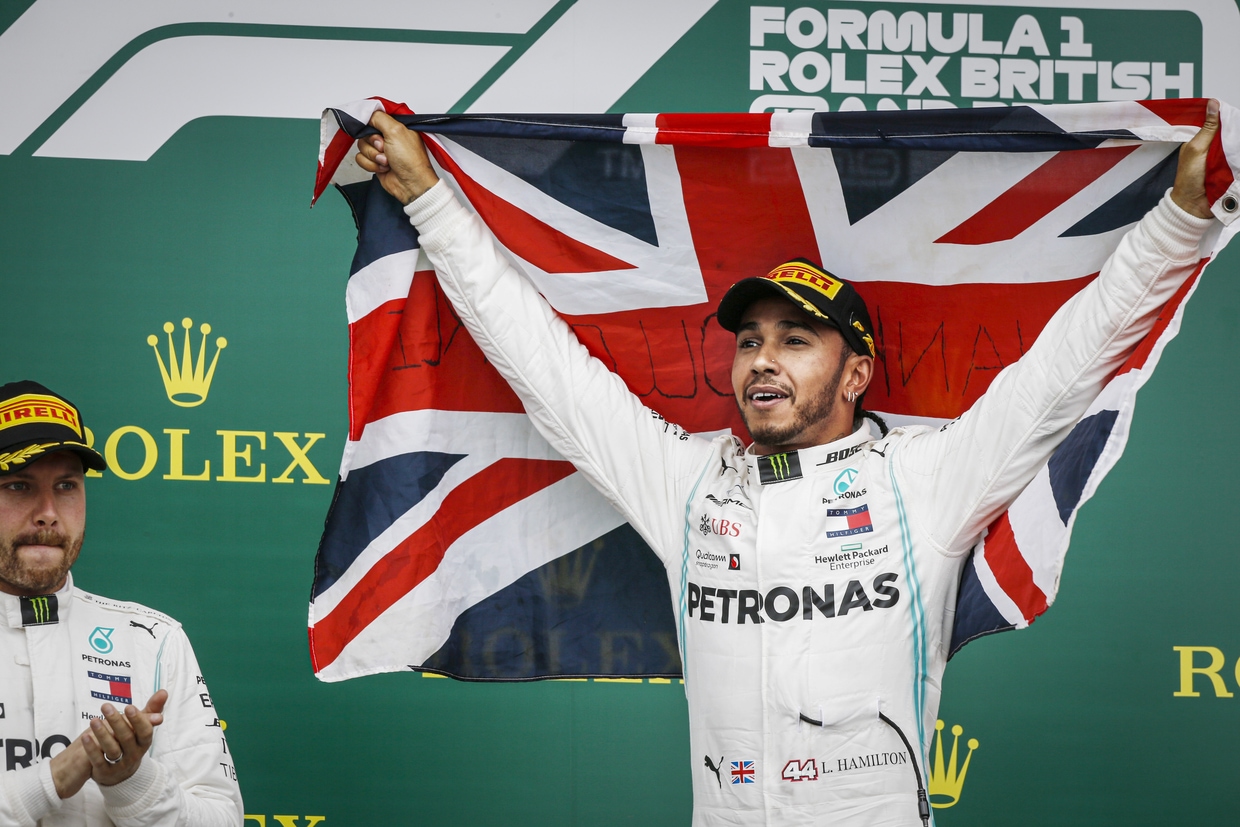 Both Schumacher and Hamilton have held a considerable presence in the F1 Paddock during their careers. Schumacher raised the bar with his approach to fitness, politics, and in building a team focused on achieving his goals.

Like Schumacher, Hamilton's grown to become the clear team leader at Mercedes and plays a crucial role in motivating those around him. When other teams and drivers raise their game, Hamilton and Mercedes have a track record of raising theirs.

Away from the track, the two are decidedly different characters. Schumacher was a very private person during his time in F1 and was most likely to spend his weekends away from the circuit at his family home in Switzerland, or out riding horses with his wife Corinna - herself an accomplished competition rider.

Hamilton lives in a very different world now to the one Schumacher did during his Formula 1 career, with perhaps the one clear difference being the growth of social media, which Hamilton has used intelligently to amplify his voice on the world stage. Unlike Schumacher and almost any other driver of the current generation, Hamilton's fame and status have transcended motorsport more so than any other driver since Senna.

He's a fantastic ambassador for F1 and has shown as much in the way in which he's used his platform to raise awareness of important causes, and critical issues affecting the world such as climate change, diversity, and equality.

It's fair to say that Hamilton divides opinion more so now than ever before, but that's just like Schumacher was at his peak. Fans new to Formula 1 may be unaware of how similar their careers were in terms of their popularity while at their peak. Both were universally adored by millions and loathed by others.

You can't win them all, but these two came closer than most.

Witness Lewis Hamilton, one of F1’s true greats, march towards a record-equalling seventh F1 world title as the 2020 season reaches its crescendo this Autumn. Official Ticket Packages are now on sale for the upcoming Portuguese Grand Prix in Portimão and the Turkish Grand Prix in Istanbul.