Why are there no American drivers in F1?

The 2022 Formula 1 season will feature two grands prix in the United States for the first time since 1984, but no American drivers for a seventh straight season. Why is that?

There's clearly a healthy appetite for F1 in the US. With F1 growing its TV audience in the States and the addition of a new race in Miami next year, there's plenty to be excited about. But despite all that, there's still no American driver for F1 fans to follow. A pattern that, aside from a few select instances, has become pretty much the norm over the past three decades.

Rossi - American fans want a home driver to cheer for

Alex Rossi, a current IndyCar frontrunner who appeared in five grands prix with Marussia in 2015, believes there are some good reasons why fewer American drivers are switching to Formula 1 these days.

"The reason why is that it's very difficult to convince parents to move their lives while their kid is 12-15 years old, drop out of school for the most part, be homeschooled, and go live and race in Europe," Rossi told the MotorMouth podcast.

"That's the number one reason in my mind why you don't see more American guys give it a go, just because of the commitment, your entire family's life has to change, and I was very fortunate to have the parental support to go do that.

"I think in the motorsport community, [F1] is very well received [in America]. We all know F1 in a lot of ways, really in all ways, has the most technologically advanced cars in the world, goes to some of the greatest tracks in the world, and has the greatest teams and drivers.

"For American sports fans, they have so many options here - NBA, NFL, baseball, golf, NASCAR, IndyCar, Formula 1 - they're going to be attracted to the most entertaining item that they can lay their eyes on, and the other thing is, there's no American driver to cheer for.

"Americans are very patriotic people, and it's hard to get behind a German guy, a Spanish guy, a British or French guy, they want to cheer for an American, which was one of the really good things I had going for me. I did have a lot of support from the American side of things, because they did want American representation." 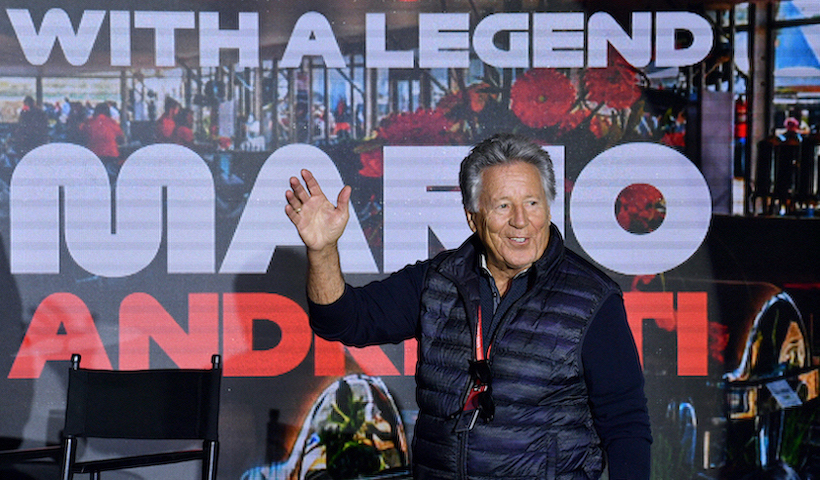 Andretti: "the only thing missing is an American driver"

Rossi's comments were echoed recently by Formula 1 legend Mario Andretti, who believes America would go 'crazy' if they had a driver to root for, and even put forward his own suggestion as to who America's next F1 driver could be.

"I think America is probably the only country on the planet that can really properly host two Formula 1 races. Quite honestly, I think F1's fanbase in America is somewhat understated, but it needs to be perked up – and the only thing it's really missing is an American driver," Andretti told Autosport.

"I'm pushing like hell for Colton [Herta - IndyCar's youngest ever race winner]. You've got to remember, Colton went to race in England when he was 15 years old, all by himself. That's always been his objective [to get to F1] but he's very quiet and unassuming, he's not pushy, but I see a quality there – a Formula 1 quality.

"We'd need the American driver with a top team, not in the back with no chance. If you could get an American driver in F1, producing results, you'd have America going crazy for F1.

At 21, Herta has time on his side, but as IndyCar's youngest ever winner, he's already on the radar of a few teams in Europe. Coincidentally, his name was brought in the Thursday press conference ahead of the recent Portuguese Grand Prix.

Asked if drivers in other series could make the switch in the coming years, Lance Stroll mentioned Herta as having F1 potential.

"Colton Herta won the IndyCar race," said Stroll. "Maybe he's good enough. It's hard to say. There are so many good drivers out there. To give you an example, Herta is maybe one kid that would do just fine in F1."

Herta himself played down the talk but did admit in an interview with RACER that he hopes to get the chance to sample F1 machinery soon.

"Any conversation about Formula 1, it doesn't really do much for me, unless you're putting pen to paper," he said.

"There's so, so many unknowns and stuff that never ends up happening. People can say that all they want, but the fact is, until it happens, it doesn't mean anything.

"People are definitely watching, and I would love, if nothing else comes of it, just to test a Formula 1 car because I'm sure even the bad cars feel pretty amazing to drive." 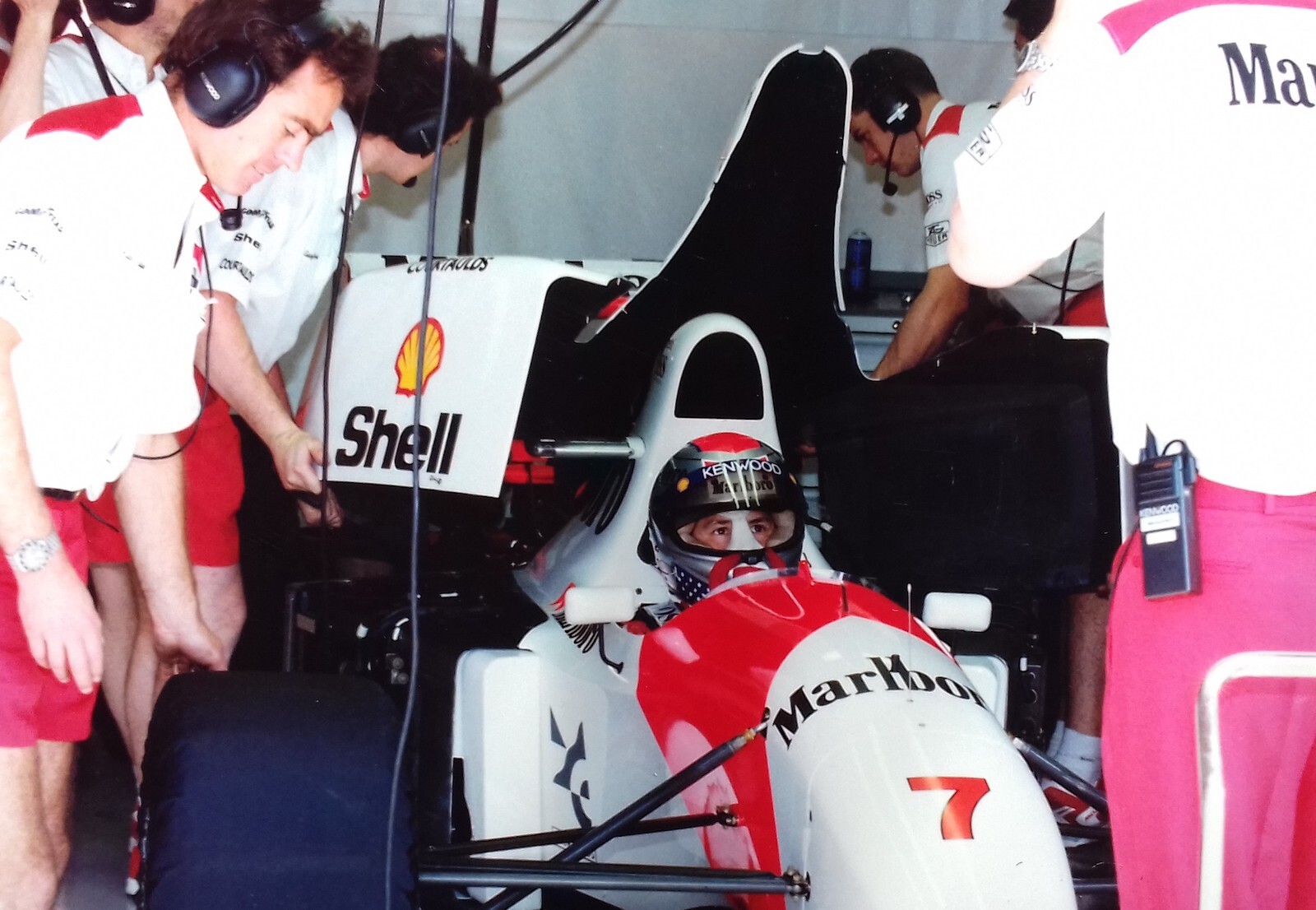 American F1 participation, on track at least, has been relatively minimal over the past three decades. Aside from Alexander Rossi in 2015, America's most recent F1 driver was the aptly named Scott Speed back in 2006-07. Speed had two outings in Friday practice for Red Bull during the 2005 Canadian and United States Grands Prix and was given a full-time drive with Red Bull's sister team Toro Rosso the following season.

Speed's time in F1 was short-lived, and he failed to score a single point from his 28 starts with Toro Rosso. Perhaps his more significant contribution to Formula 1 came as a direct result of his dismissal partway through the 2007 season, when his seat was handed to a young driver named Sebastian Vettel. Wonder what happened to him?

Prior to Speed, you have to go all the way back to 1993 to trace America's previous entrant. Michael Andretti, son of Mario, entered Formula 1 with considerable fanfare as Ayrton Senna's teammate at the McLaren team, and much was expected of the American given his IndyCar title win two years previously.

Despite McLaren team principal Ron Dennis predicting that Andretti had the skills required to win in Formula 1, his time with McLaren was a disappointment and he failed to see out his debut season.

With rule changes limiting the number of laps a driver could do in practice, Andretti struggled to adapt to the McLaren as it was vastly different to the car he'd raced in the States. After a slow start, the pressure increased further following some huge crashes, and by mid-season, there was already talk of him being replaced in favour of test driver Mika Häkkinen.

Choosing to remain in the US rather than relocate closer to the team’s base in England, Andretti attracted some criticism for failing to take his F1 switch seriously enough. Some McLaren team members even urged him repeatedly to make the move, but Andretti continued the long-haul commute until his time with the team was up.

Ironically, Andretti's final race for McLaren turned out to be his best, with a third-place finish at Monza being his only podium in Formula 1. It came too late, however, as Dennis had already decided to replace Andretti with Häkkinen for the next race.

Andretti returned to IndyCar and immediately put his F1 frustrations behind with a win at the 1994 season-opener at Surfers Paradise. He continued to be a frontrunner for the remainder of his racing career, ending as one of the most successful Indy Car drivers of his generation. 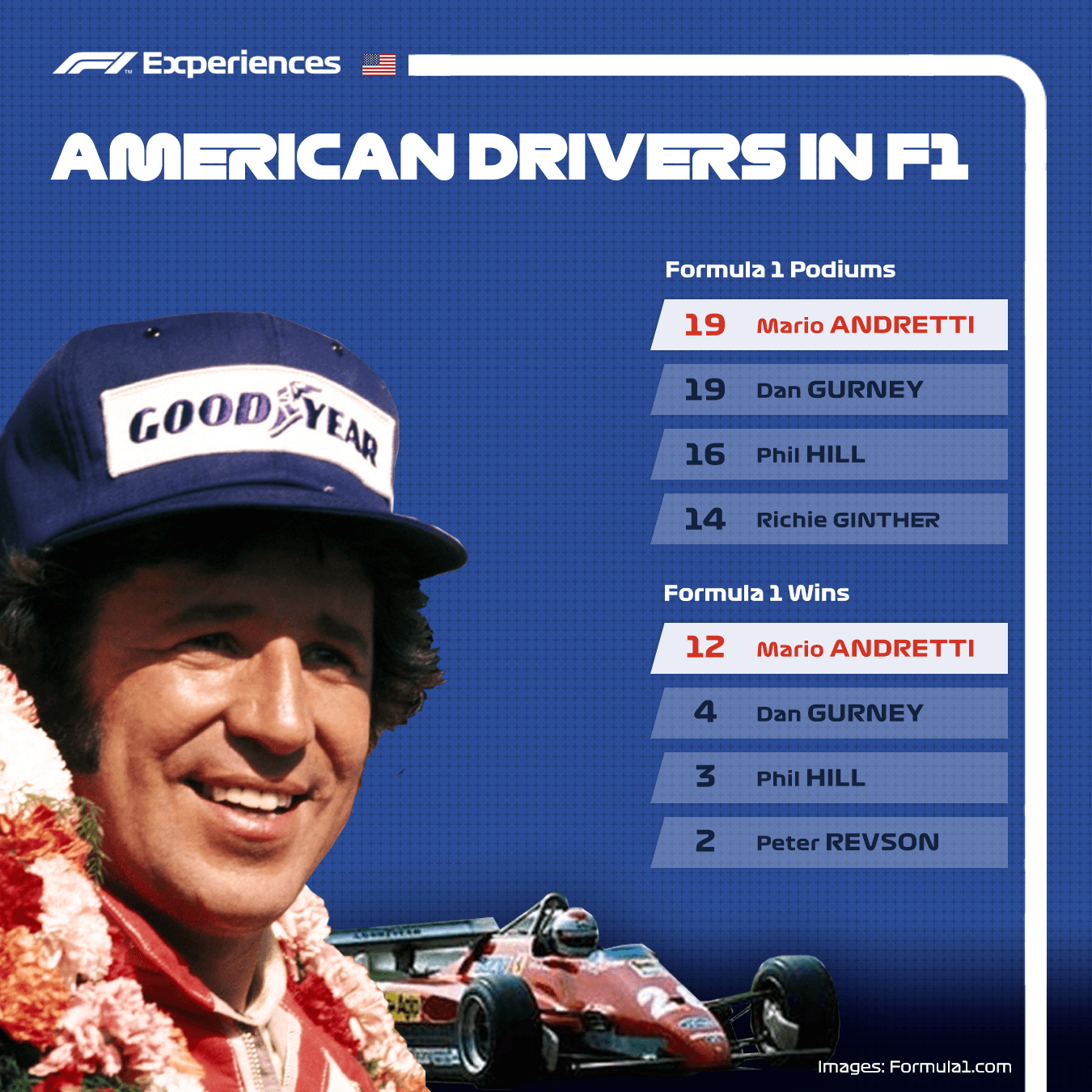 Who was American's most recent F1 winner?

The most recent American to win a grand prix and only the second-ever American (after Phil Hill in 1961) to become F1 World Champion was Mario Andretti.

Born in Italy in 1940, Andretti only became an American citizen in 1964 following his family's emigration there a decade earlier. He started his motorsport career on dirt ovals before moving up the ladder to win the USAC title (a precursor to IndyCar) in 1965 before his Formula 1 debut came a few years later at the 1968 US Grand Prix.

Driving for Colin Chapman's Lotus team, Andretti became one of the few drivers in history to qualify on pole for his debut grand prix, but despite making an immediate impact, it wasn't until some years later that he committed to F1 full-time.

Preferring to focus on his racing commitments in the US, Andretti made only a few sporadic appearances over the coming years but did manage to secure his maiden F1 win while driving for Ferrari at the 1971 South African Grand Prix.

A return to Lotus in 1976, this time as a full-time driver, was the turning point in Andretti's F1 career. After a promising first two seasons, during which he finished finish sixth and third in the standings, he became world champion in his third season in 1978 – a feat no other American driver has emulated since.

As Lotus fell into decline in the years that followed, so too did Andretti's opportunities to build on his world championship triumph. After an unsuccessful switch to Alfa Romeo, he left F1 to return stateside at the end of 1981.

Having signed up to a full IndyCar season in 1982, Andretti managed one final F1 swansong later that year with Ferrari as a replacement for the injured Didier Pironi. He signed off in style with an emotional pole position and podium at Monza before his final F1 start at the season-ending Caesars Palace Grand Prix.

Following the end of his Formula 1 career, Andretti further enhanced his legacy as America's greatest ever racer with a fourth IndyCar title in 1984 and continued to compete full-time in the series until 1994, partnering Nigel Mansell at Newman Haas in his final two seasons.

Andretti hung up his helmet for good six years later at the age of 60, with the 2000 24 Hours of Le Mans being his final competitive motorsport appearance in a career that spanned more than 40 years.

Be there with us when F1 returns stateside