In Conversation with Jenson Button at the British Grand Prix

From being called up by Frank Williams at the age of 19 to winning the World Championship with Brawn GP ten years later, Jenson Button achieved it all in Formula 1. The Sky Sports F1 pundit was our guest in the Champions Club at the 2019 British Grand Prix. 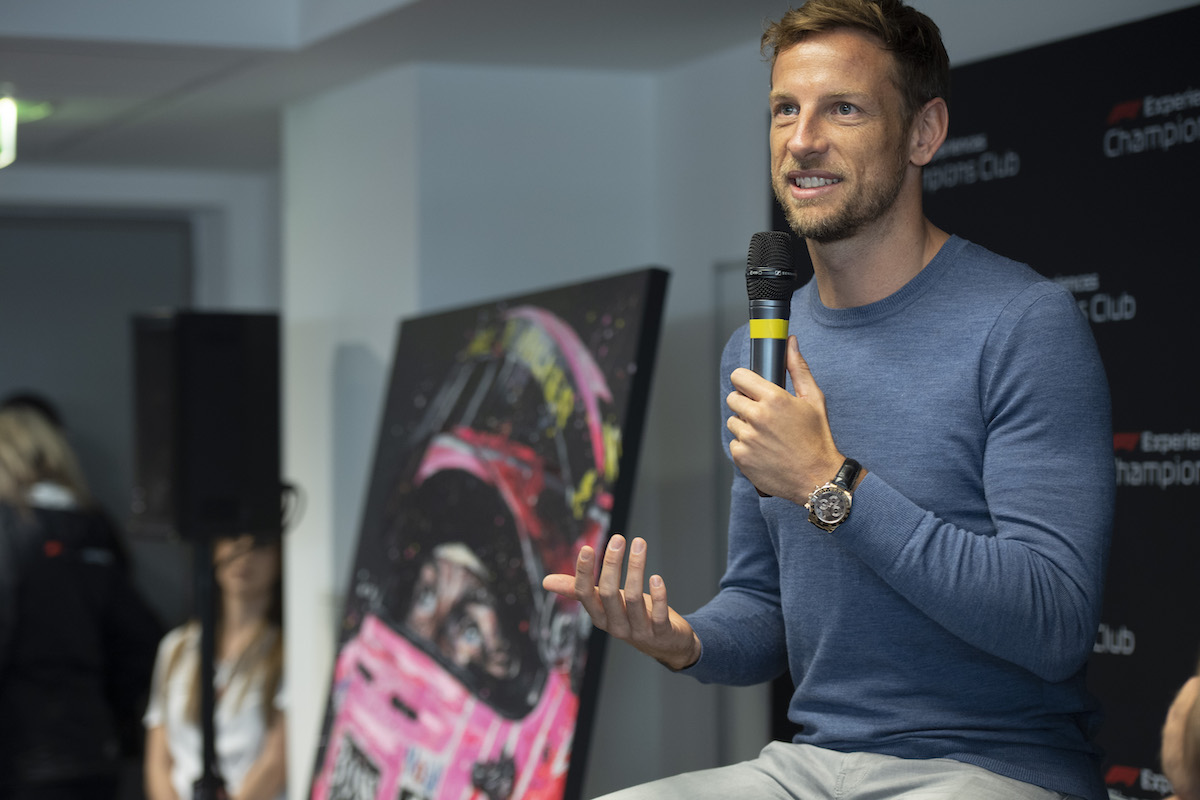 We’ve just received the news that Silverstone will be on the F1 calendar for five more years!

I know, it’s amazing. We can stop talking about whether Silverstone is going to be on the calendar next year, which is fantastic. There’s no reason for it not to be here. Look at the grandstands. They are absolutely packed, and they have been since Friday morning. It’s really good to see such a big crowd here. There’s absolutely no reason to get rid of this race.

You were reunited earlier this weekend with your championship-winning Brawn from 2009.

It was very emotional. It was weird having cameras there. Walking in to see my championship winning car. It was 10 years ago already, a long time. I was the first F1 car to drive on the new asphalt here at Silverstone. I was told I couldn’t drive the car on the kerbs, or brake too hard. It’s a carbon fibre car, obviously. It has carbon fibre wishbones and one carbon fibre gearbox. They can’t make any more. If I break it, it’s game over. It will never run again. So, I had to be a little bit gentle. But I loved it. The seat still fits, which is great. Everything just worked as it should. It sounds silly because every car has a throttle pedal, brake pedal, steering wheel. But a lot of cars don’t feel quite right. As soon as you jump in the Brawn, it just feels right. It brought back so many memories. We didn’t have torque back then. It was a 2.4 litre V8 with 800 horsepower and you really had to scream the engine to get the power out of it, which is very different to now.

DID YOU KNOW? Brawn GP raced for only one season. The team was formed from the ashes of the Honda team, which pulled out due to the Global Financial Crisis. After winning both Constructors and Drivers World Championships in its debut season, the team was sold by Ross Brawn to Mercedes, and the Brit moved across to run the team.

Did you know the Brawn was good the first time you sat in it?

I was just excited to get in the car, because most of the people in the team didn’t think they would even have a job in 2009. Honda pulled out at the end of 2008. Nobody thought we would be racing. When we heard that we were going to race, and that the team would be called Brawn GP, and that we would have a shakedown at Silverstone, everyone was very excited. We had to ask McLaren if we could use the Mercedes engine. Ron Dennis actually said no, but Martin Whitmarsh said yes. The engine didn’t fit in the back of the car, initially. It was running higher than it should have been. In an F1 car, centre of gravity is everything.

We weren’t sure how it was going to feel out of the box. I drove it here for the first time with Rubens [Barichello], my teammate at the time, watching on. I did a couple of laps and went back in. The team asked me how it felt. It felt like a Formula 1 car. But the important thing was that there was nothing wrong. Nothing jumped out. The first test of many cars I drove in F1 was a bit scary, because you would find fundamental issues straight away, normally with aerodynamics. But this was great. We went to the first test in Barcelona a couple of weeks later. It was the last test before the start of the season. Everyone else had already done two tests. We were excited to be there and the car looked good. I came in after my first run and told my engineer that I had a lot of understeer. It was hopping at the back in low-speed corners. He replied that I was six tenths quicker than everyone. So, we did some set up work and after a couple more runs, we ended up one second quicker than everyone else. Then we put some extra fuel in, because we didn’t want to show our hand.

Let’s go back to that call you received from Frank Williams at age 19.

I was at the pub; the Vine Tree in Froome. It had very sticky floors. We used to have competitions about how much we could eat and how fast we could eat it. There wasn’t a lot going on in Froome. Mid way through the feast, I got a call and it was Frank Williams. I didn’t believe it was him at first. I went outside for some privacy. His first words were, ‘Do you think you are ready for Formula 1?’. As a 19-year-old that hadn’t even raced a full season of Formula 3, I said no. He thanked me and ended the call. Afterwards, I had second thoughts. I spoke to my Dad and he said, ‘You did what?’ I called Frank back and said, I’m ready now.

After a successful first season with Williams, you moved to Benetton in 2001.

It was a learning curve; the most difficult year of my career. I left Williams, which was a lovely team to work with and the car was nice to drive, it suited me. I didn’t really learn as much as I should have. I didn’t do as much work with my engineers. It was different back then. We didn’t have simulators. I wasn’t being pushed to work more with my engineers; everything was going well. Then I moved to Benetton and it wasn’t fine. It was very difficult to drive the car. It was a difficult team to work with when you are not competitive, especially with Flavio [Briatore]. A big learning curve. That difficult year made my career. I knuckled down and worked with the engineers, started to understand the car and how that could help me.

You moved across to BAR in 2003 to partner the outspoken Jacques Villeneuve. How did you react to some of the comments he made about you in the beginning?

I beat him! Jacques is an interesting character. He is also a good friend and I respect him. He’s very outspoken, but we love that in Formula 1. Without people like him, the sport would be boring. But he did make some comments at the launch of the car. He told the journalists he didn’t know what I was doing there. That I should be in a boy band. It was a tricky situation. Jacques basically built the team. Then David Richards came along to run it and was doing a great job. But David Richards brought me into the team, and I think that was the difficulty for Jacques. Dave was very excited about having a young driver alongside the World Champion. In the end, we got on well and it was a good fight.

Tell us about your first win, the 2006 Hungarian Grand Prix.

It was a very up and down weekend. I’ve always loved Budapest and the Hungaroring. Practice was going really well, then my engine blew up. I missed most of practice. In those days, you got a ten-place grid penalty for the race. I qualified 4th and ended up starting from 14th. Alonso and Schumacher also got penalties and ended up starting right next to me on the grid. We were at the back, fighting our way through in mixed conditions. It was an action-packed race. I found myself with a 30-second lead with about 10 laps to go. Every lap I was asking the team, ‘Is everything ok? I just heard a rattle.’ It was a tough 10 laps. I was so worried. Then with 1 lap to go, I didn’t want the race to end. I loved the feeling of leading the Grand Prix and knowing that I was going to win. It was also great to win for Honda; it was their first victory for many, many years.

After winning the championship with Brawn, you moved across to McLaren to partner Lewis Hamilton.

I remember Ross Brawn telling me that year that he thought I was making the wrong decision. He was upset that I wanted to leave the team that just gave me the World Championship. I had my reasons for it. I knew that during 2009 we hadn’t really spent the money on developing the 2010 car. Ross was worried about the future of the team, so he was being careful about how much money he was spending. It was the right move for me at the time.

It was exciting to race for a team like McLaren. I’d grown up watching drivers like Alain and Ayrton race for them. I remember the first time I walked in the door, I asked the team in Woking, ‘Is this Lewis’ team? Am I going to get a fair crack at it?’ They told me I’d have 100% equal equipment. They stood by that, apart from one time when it didn’t happen for one race. They had a new front wing that they put on Lewis’ car, but they told me I’d be first for the next major update. They were 100% fair during our whole time together.

DID YOU KNOW? Button won 15 times during his 17-year Formula 1 career, including 1 win for Honda, 6 wins for Brawn and 8 wins for McLaren. In seventeen attempts at the British Grand Prix, he never finished better than 4th.

You had Fernando Alonso as your teammate for your final two seasons in Formula 1, but the results were hard to come by.

It was mixed emotions. It was tough for both of us. We’d both won Championships and been in winning cars since, so we had a tough few years. Reliability was an issue and we didn’t have the pace in the car. We had to make fun of the situation a little bit. We got on the podium at Interlagos, after we’d qualified 15th and 16th or something. It was tough. Racing drivers are emotional and sometimes we have outbursts. I didn’t call [the Honda] a GP2 engine, but I get it when any driver has an outburst. You are putting everything on the line and there’s so much emotion. It was a tough couple of years, but it’s good to see those years help McLaren build as team. Getting through such a tough period, we are seeing the benefits from that now. This year has been a fantastic improvement for McLaren, and well deserved.

Any drivers on the 2019 grid stand out for you?

F1 is in a great place; there’s lots of very talented drivers. It’s a shame that there’s just one team at the front in most races. We’d all love for Ferrari and Red Bull to be that little bit closer, but we’ve had a couple of interesting races like Canada and Austria. We’ve got a real mix of guys fighting at the front. Max [Verstappen’s] performance in Austria was on another level. He did a great job. For me, Max has stepped up this year. He’s always been fast and had supreme skill. But now he’s got it together. He understands his limitations and has worked with them. He’s not made any mistakes this year. He is close to the complete driver.

You can’t take anything away from Lewis. Yes, he is in the best car but he is doing the best job. He’s been untouchable almost every race. I don’t know whether he was playing with Valtteri earlier in the year, but after the first 3 races, he’s been so consistent.