F1 Glossary: A-Z of the most commonly used terminology

Improve your understanding of the fastest sport on earth by learning the most common words, phrases, acronyms and technical terms used in Formula 1.

The innermost point of the driving line taken through a corner. Driving as close as possible to the apex (‘hitting the apex’) ensures the driver is taking the straightest possible line and maintaining the highest speed through a corner.

A slower car that is often lapped (sometime multiples times) during the race by the leading cars. Backmarkers are shown a blue flag by marshals, which indicates a faster car is approaching and the driver should move out of the way safely.

The base frame or main supporting structure of a Formula 1 car to which elements such as the engine and suspension systems are attached. Sometimes also known as a monocoque chassis, because of the way in which the chassis is integrated with the strong carbon fibre body (or shell) of the car to better protect the driver in accidents.

A series of corners on a circuit, normally taken at low speed, that features at least two changes of direction. Chicanes are often added to high-speed sections of a circuit to slow the cars down, improving safety and encouraging more overtaking. The majority of current Formula 1 circuits feature at least one chicane. 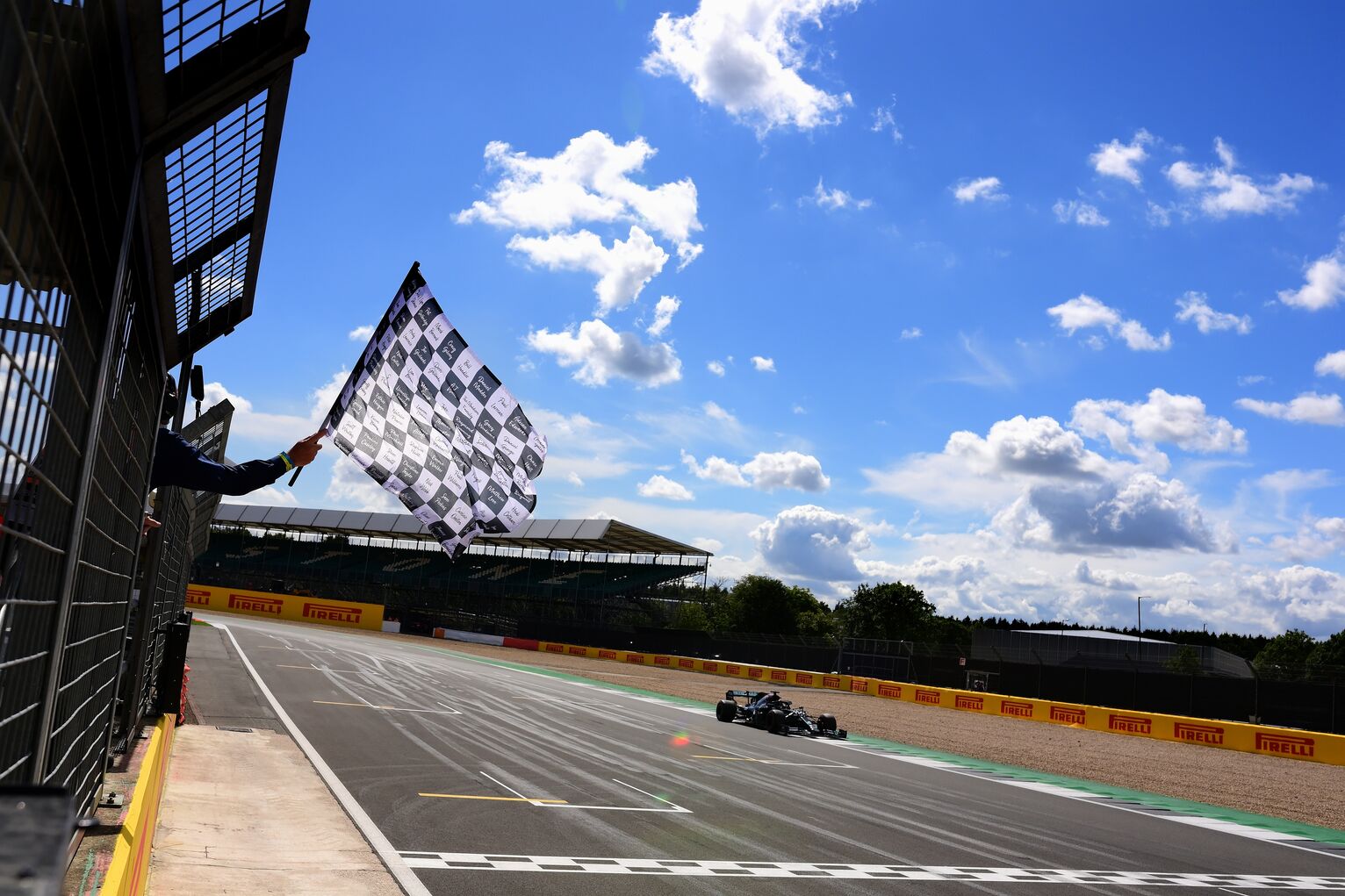 The area of the chassis where the driver sits. In modern F1 cars, the driver is almost laying down on a carbon fibre “seat” that has been specifically moulded to their body shape. Modern F1 steering wheels are also highly advanced, featuring a digital display and an array of buttons to control different functions and paddles for changing gears.

The aerodynamic force that pushes cars downward at speed, making them “stick” to the ground and improving cornering forces. Front and rear wings, as well as diffusers and other aerodynamic elements that create downforce are a significant focus of modern F1 car design.

One of several penalties that can be imposed on a driver by stewards during a Formula 1 race. To serve a drive-through penalty, the driver is required to drive through the pitlane without exceeding the prescribed speed limit (normally 80km/h) before re-joining the race without stopping.

Introduced to Formula 1 in 2011, the Drag Reduction System (DRS) is activated by drivers to increase the top speed of the car and make overtaking easier. It works by opening an adjustable flap on the rear wing of the car. DRS can only be activated at specific detection points when the pursuing car is within one second of the car in front.

The Federation Internationale de l'Automobile (FIA) is the governing body for many international racing series, including Formula 1. Established over 100 years ago in France, the FIA currently has member organisations in 145 countries and also promotes road safety around the world. The current president of the FIA is Jean Todt, who was Team Principal at Ferrari during Michael Schumacher’s most successful seasons with the team in the early 2000s.

The lap that immediately precedes the start of the race. During the relatively slow formation lap, the grid is cleared of mechanics and other team members ready for the cars to line up once again and begin racing. Also known as the warm-up lap or parade lap. 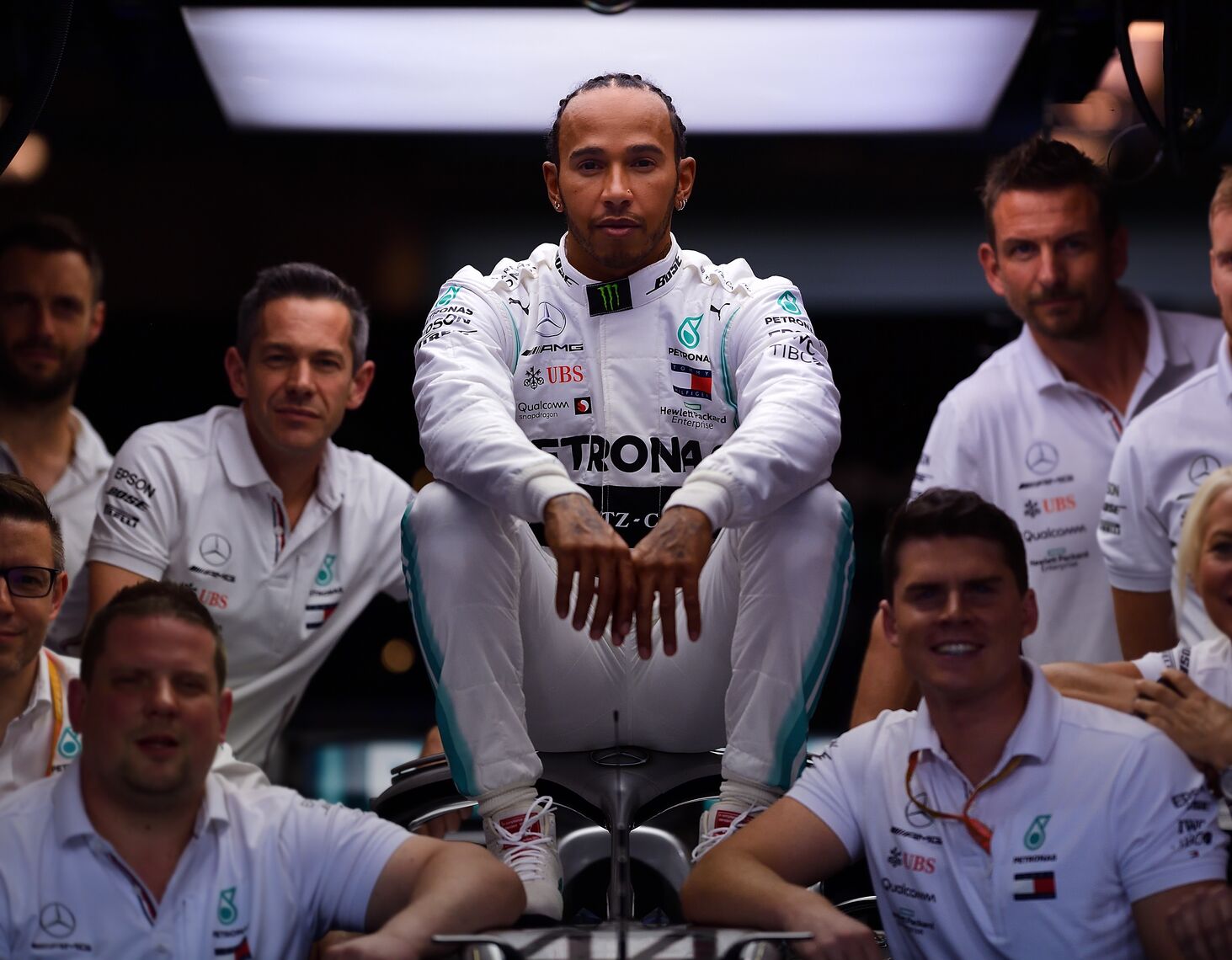 Also known as a Grand Slam. Achieved by a driver when they take pole position, record the fastest lap and then lead every lap before taking victory in a race. This rare feat has only been achieved by 25 drivers at a total of 63 races since the advent of the modern World Championship in 1950. Jim Clark holds the all-time record with 8 Grand Chelems from Lewis Hamilton, who has scored 6.

A cockpit safety structure that was introduced to Formula 1 in 2018 and has already been credited with saving the lives of several drivers. Resembling a horseshoe, the halo consists of a bar that surrounds the drivers head and is bolted to the chassis at three points.

Required to be worn by all Formula 1 drivers since 2003, the HANS (Head and Neck Support) device is a head restraint that’s designed to reduce the likelihood of serious head and neck injuries in accidents.

A lap of the circuit that a driver undertakes to test that the car’s throttle, brakes, steering, tyres and other important functions are operating properly. Drivers return immediately to the pits after completing an installation lap.

Opposite terms used in Formula 1 to describe the sensitivity of a car’s front end to steering inputs. Oversteer happens when a car turns (or steers) more than a driver intends, while understeer happens when a car turns less than a driver intends. Although both phenomena have negative effects on tyre wear and lap times, F1 drivers and designers are more likely to tolerate a car with oversteer rather than understeer, as it allows more speed to be carried into a corner and ultimately faster lap times – this advantage, however, comes with a cost of greater front-end instability and a higher risk of spinning out. 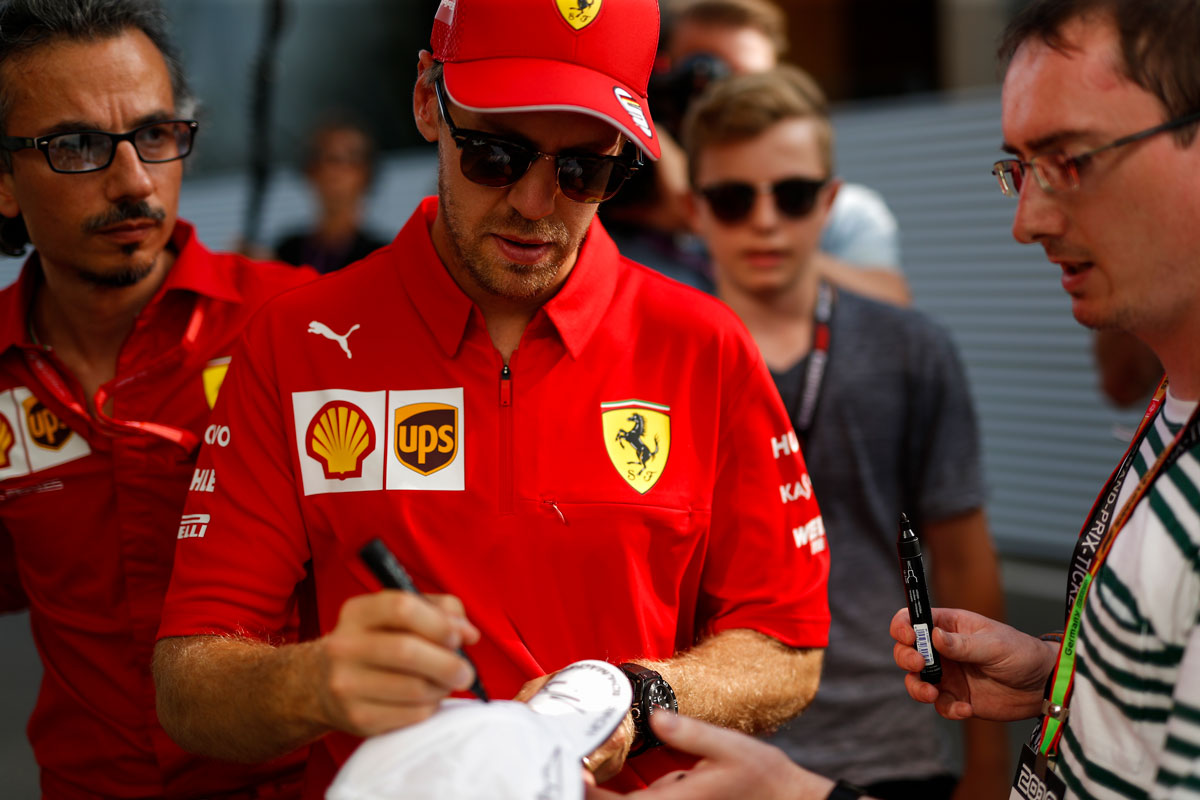 The area behind the team garages (or pits) at every Formula 1 circuit that is home to the teams’ technical staff and equipment, catering, media, race officials and other important functions that contribute to the successful running of the race weekend. Access to the Paddock is tightly controlled, though F1 Experiences does offer guided tours and day passes with selected packages.

Literally translated from French as ‘closed park,’ this is a secure parking area where Formula 1 cars must be left after qualifying. No maintenance or repairs may be carried out by the team when the cars are in parc ferme.

The area at a circuit that houses the team garages. The pits are accessed by a special section of the circuit called the pit lane where speeds are limited (from pit entry to pit exit), and drivers stop during the race in front of their team’s garage for pit stops to change tyres or repair mechanical issues. Senior members of each team sit at special stations with banks of computers on the pit wall – located on the track side of the pit lane closer to the circuit – to monitor their car’s performance during practice, qualifying and the race.

The raised area, normally above the pits and next to the start/finish line, where the top 3 drivers are presented with trophies and spray champagne after the finish of the race. A photo opportunity on the podium is included with select packages from F1 Experiences.

The first position on the grid at the start of the race. Pole position is earned by the driver recording the fastest time in the third and final period of qualifying (Q3).

Formula 1 sessions that take place on every race weekend and allow the drivers to familiarise themselves with the track conditions, work on the set-ups of their cars, test different tyre compounds and prepare for qualifying and the race. Two 1-hour free practice sessions normally take place on Friday (F1 and FP2) before a final 1-hour session (FP3) before qualifying on Saturday.

The one-hour session on Saturday afternoon that determines the order in which drivers start the race. Different formats for qualifying have been used over the years, but the current “knockout” system has been in force since 2006. Qualifying is currently separated into three periods; the slowest cars are eliminated during the first two periods (known as Q1 and Q2) before the top ten cars compete in Q3 for pole position. 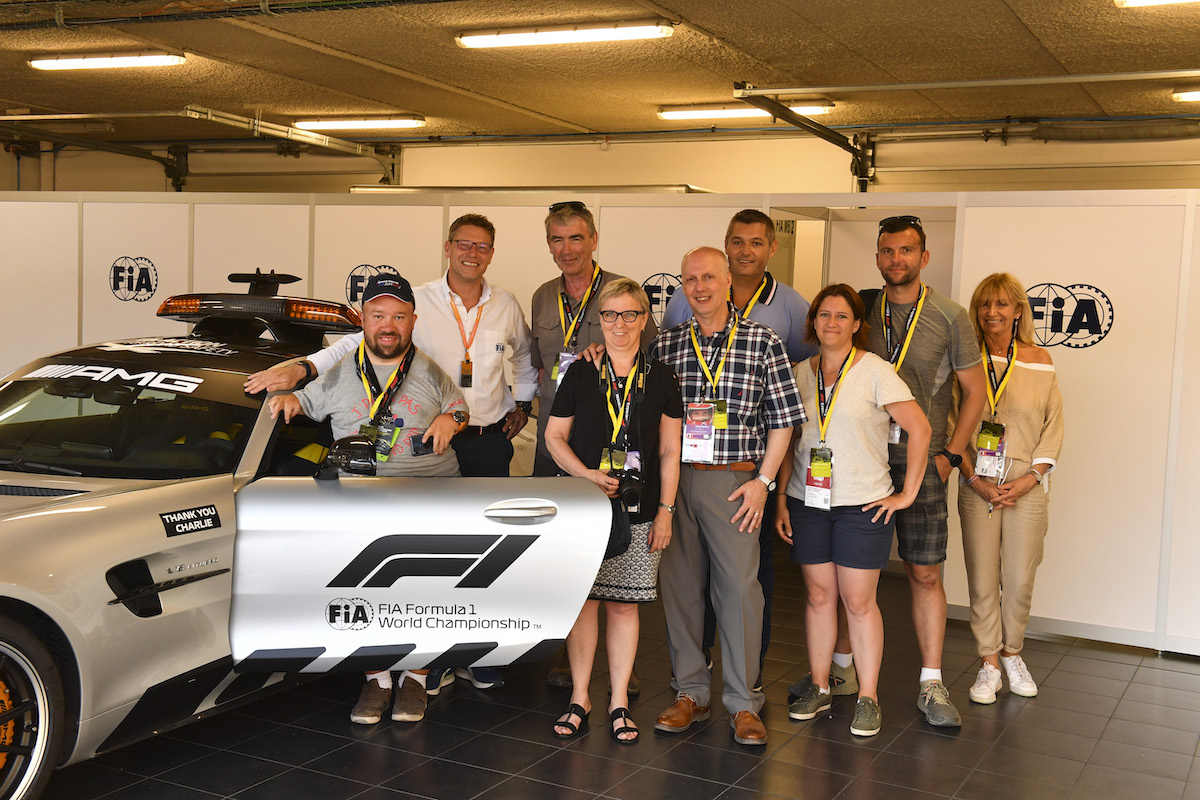 An official car that is called into action during a race when there is a danger on the circuit, generally resulting from an accident or extreme weather conditions. The Safety Car runs in front of the leaders to slow the cars down until it is safe to resume racing. The current Safety Car used in Formula 1 is a Mercedes-AMG GT R and it is driven by Bernd Mayländer. The German has been Formula 1’s Safety Car Driver since 2000 and has led over 700 laps during his career. Formula 1 also introduced a Virtual Safety Car (VSC) in 2015, which requires drivers to reduce their speed by 35% and is coupled with waved yellow flags in the area of the circuit where the danger lies.

In order to ensure that teams are complying with F1’s current regulations, all cars are subject to regular technical and safety checks before being declared legal to race. These checks are carried out by qualified technical representatives from the FIA (scrutineers) before the cars hit the track at every race weekend and after accident repairs.

Sophisticated modern Formula 1 timing systems split lap times into three sections, known as sectors. Each sector is equal to approximately one third of the lap distance.

When travelling closely behind another car on a straight section of a circuit, the pursuing car can benefit from a slipstream (or draft). The area of low pressure created by the car in front means that the pursuing car requires less power to maintain its speed than when moving independently. While slipstreaming can be beneficial for overtaking (and has also been used by teammates working together during qualifying), the same forces in corners (rather than on straights) result in a negative effect known as ‘dirty air’ that can slow the pursuing car and make overtaking more difficult 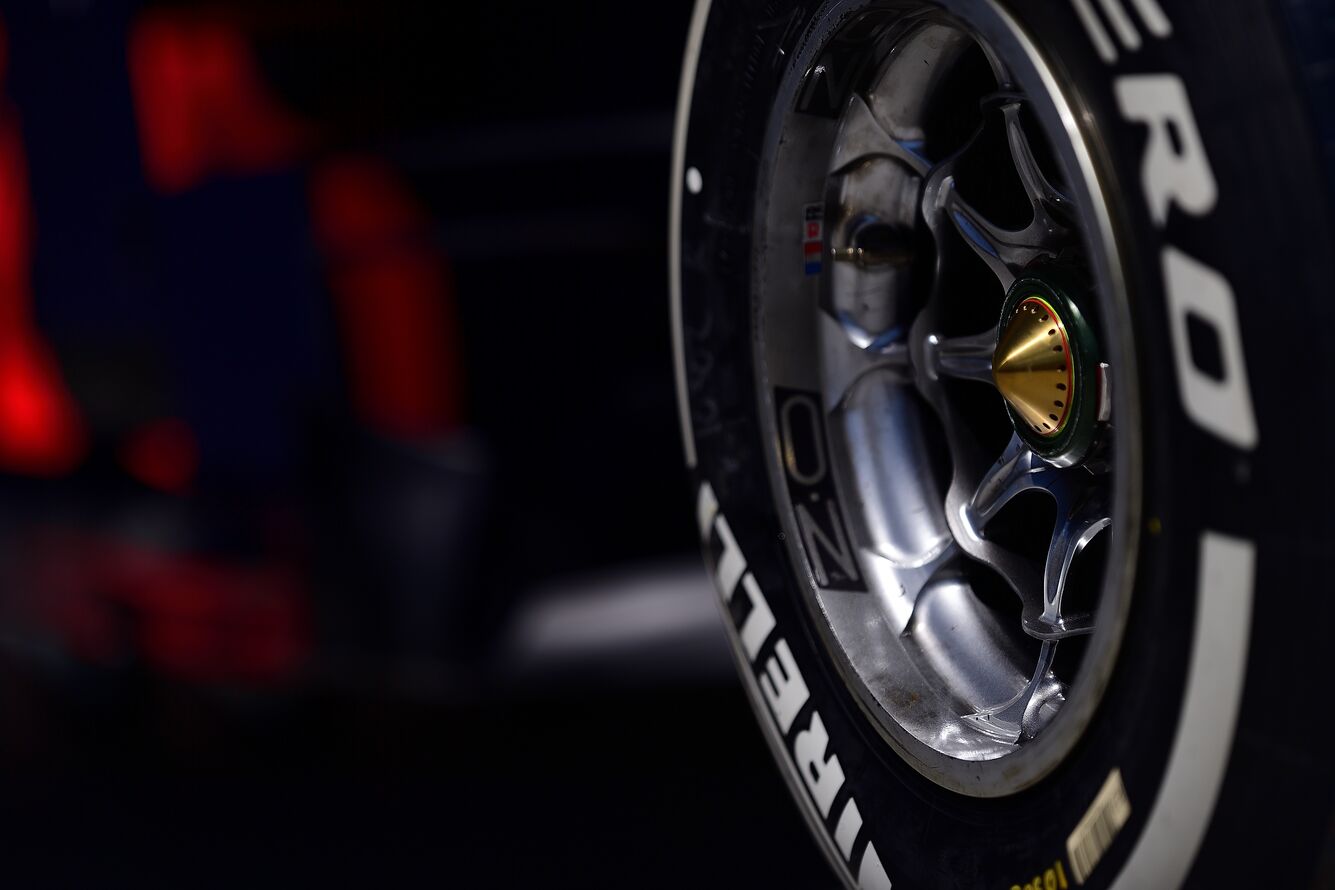 Get closer to Formula 1 with an Official Ticket Package from F1 Experiences, the Official Experience, Hospitality & Travel Programme to Formula 1's worldwide races. Packages include grandstand seating or trackside hospitality with exclusive insider access to the circuit, paddock and the stars of Formula 1.