Yas Marina: The most expensive F1 circuit ever built

Costing more than $1bn USD, Yas Marina Circuit is the most expensive racetrack ever built. Learn more about the home of the Abu Dhabi Grand Prix!

The second Formula 1 track to be built in the Middle East, following Bahrain, Yas Marina Circuit was designed by Hermann Tilke and opened in 2009 ahead of the inaugural Abu Dhabi Grand Prix. The technologically-advanced circuit features five fully-covered grandstands, a 227-berth marina and the first hotel built over a Formula 1 circuit.

Around 14,000 workers worked on the construction of Yas Marina Circuit, totaling more than 35 million-man hours. The project used approximately 225,000 cubic metres of concrete and 720,000m2 of asphalt, including a special aggregate that was shipped from a quarry in England for the high-grip track surface.

The circuit is the centerpiece of the massive Yas Island development, an ongoing project with an estimated price tag of more than $40bn USD. Measuring 2,500 hectares, Yas Island is adjacent to Abu Dhabi International Airport, around 20km from downtown Abu Dhabi. The island is connected to the mainland by the 1.1km Yas Tunnel and several highway bridges. In addition to hotels, retail centres and residential developments, Yas Island is home to some of Abu Dhabi’s largest tourist drawcards, including theme parks (Ferrari World, Yas Waterworld and Warner Bros World Abu Dhabi), the Yas Links golf course and several beaches. 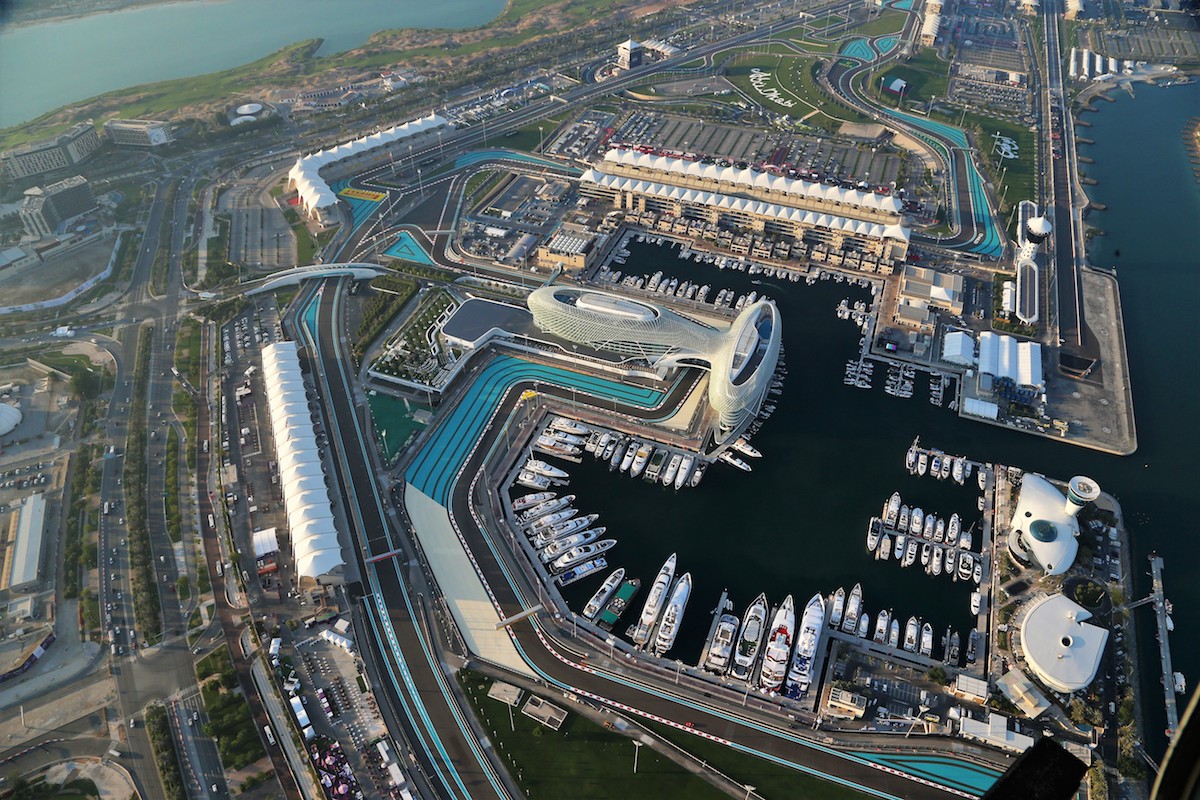 The Formula 1 circuit at Yas Marina measures 5.554km and has 21 turns, including a 1173 metre back straight – the second longest straight on the current calendar. The circuit can also function as two independent tracks measuring 3.15 and 2.36km respectively, and additional circuit configurations are available.

Unique features of Yas Marina Circuit include a run-off area at Turn 8 that extends beneath the West Grandstand and a tunnel for the pit exit. In addition to 40 pit garages in the main pit garage on the start-finish straight, 30 pit garages for support races are located at the base of the Marina Grandstand.

The 45,000 grandstand seats at Yas Marina Circuit are all covered, another world first for a permanent race track. Additional spectating areas, including the open-air Abu Dhabi Hill general admission area, two-level Paddock Club above the pits and Business Tower (which houses the Champions Club by F1 Experiences), take the total spectator capacity for the Abu Dhabi Grand Prix to 60,000. The event regularly sells out, despite having the highest average ticket prices on the current F1 calendar.

In addition to Formula 1, Yas Marina Circuit also plays host to the annual Gulf 12 Hours race for sportscars and has also staged several rounds of the Australian Supercars Championship in the past. The circuit’s 4.1km drag strip also holds regular local and international race meetings. Revheads can also partake in a huge range of driving and passenger experiences at the track throughout the year in everything from supercars to single-seaters, and guide tours of the circuit are also available.

The world’s largest indoor theme park, the 86,000m2 Ferrari World Abu Dhabi is another instantly recognizable Yas Island landmark, especially when viewed from the sky. Resembling a giant octopus, the massive red roof of the complex – complete with a super-size version of the marque’s prancing horse logo – is the largest space frame structure ever built. A regular winner in world tourism awards, Ferrari World Abu Dhabi features static displays, cinemas and a variety of rides dedicated to the famous Italian car brand, including Formula Rossa, the fastest rollercoaster in the world.

Utilizing several sections of the vast Ferrari World roof canopy, Du Arena is the largest outdoor music venue in the region. Capable of holding up to 50,000 concertgoers, Du Arena stages the A-list concerts on Abu Dhabi Grand Prix weekend that have become one of the event’s biggest attractions for many racegoers. Located adjacent to the North Grandstand, Du Arena has seen performances at the Abu Dhabi Grand Prix over the years from acts such as Guns ‘n’ Roses, The Killers, Beyoncé, Aerosmith, Prince, Paul McCartney and Eminem. Access to post-race concerts at Du Arena is included with all Official Ticket Packages from F1 Experiences. 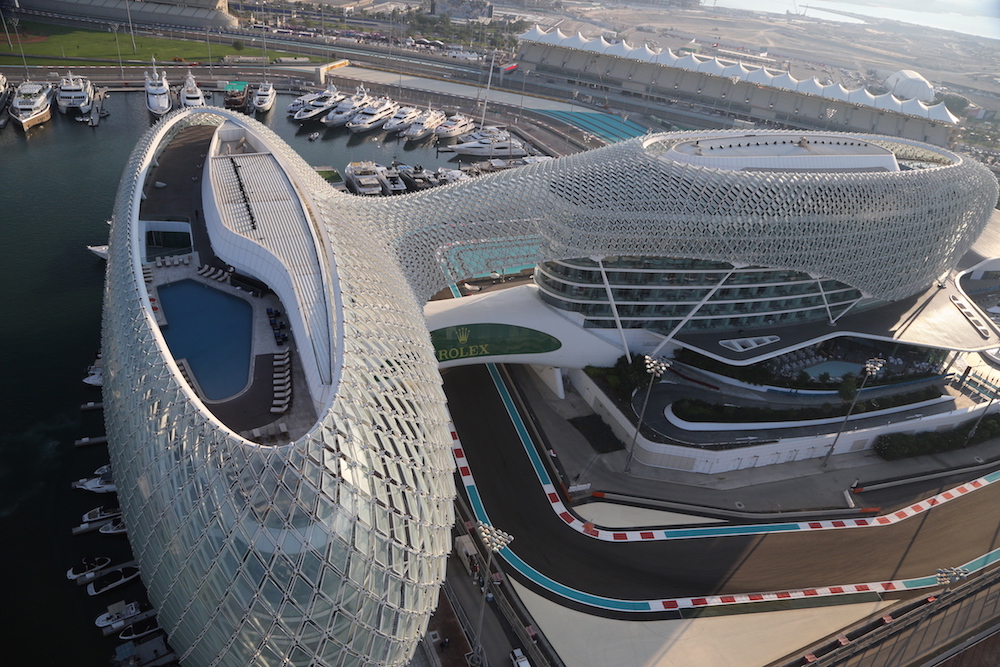 The first hotel built over an F1 circuit

One of the most iconic features of Yas Marina Circuit is the futuristic profile of the W Abu Dhabi - Yas Island Hotel (formerly the Yas Viceroy Hotel), the first hotel to have been built over a Formula 1 circuit. Inspired by the speed of motor racing and the aesthetics of ancient Islamic art, the hotel’s design comprises two curved 12-storey hotel towers linked together by a steel and glass bridge that crosses over and above the circuit between Turns 18-19.

The 5-star, 499 room W Abu Dhabi has an instantly recognizable “grid shell” façade with 5,389 individual glass elements that reflect the sun during the day and illuminate the hotel at night via an advanced LED lighting system, bathing the hotel in a warm palette of colors that is visible from miles away. F1 Experiences offers a 3- or 4-night stay at the W Abu Dhabi – Yas Island Hotel with select ticket packages for the 2021 Abu Dhabi Grand Prix.

The beating heart of trackside nightlife, Yas Marina comes alive with superyacht parties on race weekend. With 227 wet berths catering to yachts up to 175m long, many of the world’s most impressive superyachts converge on Yas Marina for the Abu Dhabi Grand Prix weekend. Away from the yachts, Yas Marina also boasts some of the most exclusive places to see and be seen on race weekend, including the popular bar and nightclub Iris, Italian restaurant Cipriani’s and Stars ‘N’ Bars, a local outpost of the American-themed diner founded in Monaco. 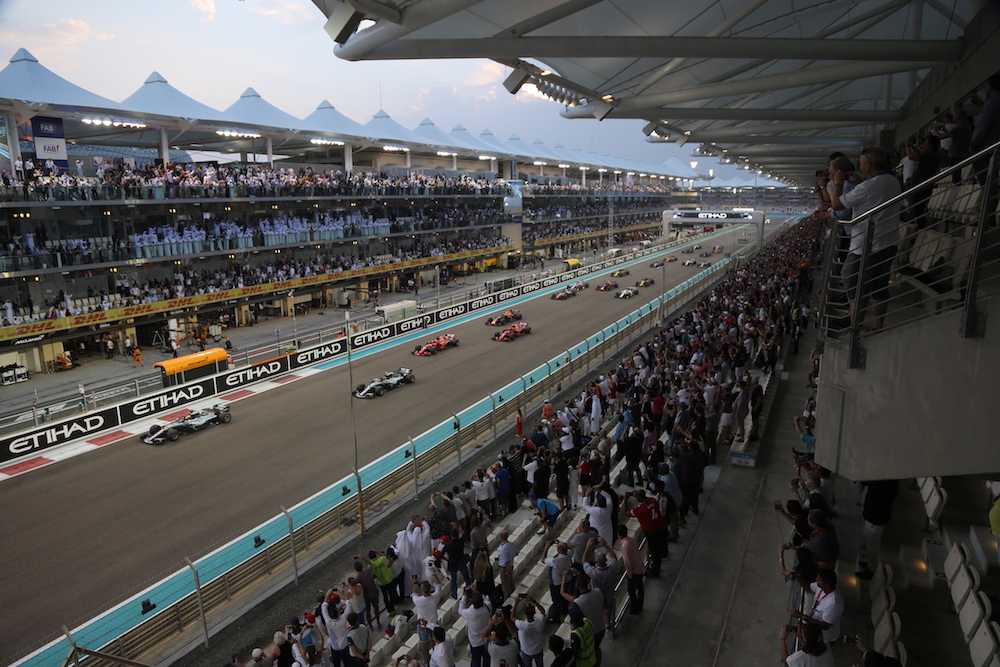 Yas Marina Circuit has hosted the Abu Dhabi Grand Prix every year since 2009. The final race of the season for much of its existence, the Abu Dhabi Grand Prix has hosted several championship showdowns, notably in 2010 when four drivers were still in contention for the driver’s title. Sebastian Vettel won that race, securing his maiden title by just four points from Fernando Alonso. Double points were awarded for the first and only time in 2014 when Lewis Hamilton took his first World Championship for Mercedes from teammate Nico Rosberg – the tables were turned two years later when Rosberg clinched the title for Mercedes, then promptly announced his retirement from the sport. Lewis Hamilton is the most successful driver at Yas Marina Circuit, with five victories.

Uniquely, the Abu Dhabi Grand Prix is the only Formula 1 race to take place at dusk. The race begins at 5:10pm local time, around 20 minutes before sunset. Almost 4,700 light fixtures – the largest installation in the world at a permanent sports venue – are turned on before the start of the race to ensure a smooth transition from day to night for the drivers.