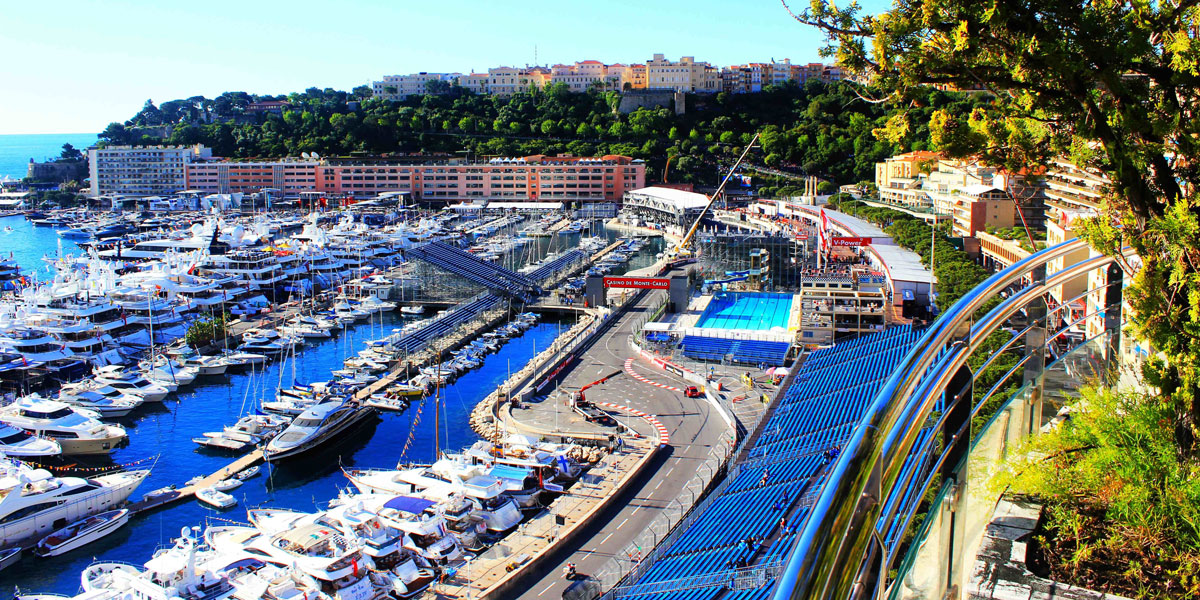 Formula 1® takes to the streets this weekend for the 76th edition of the Monaco Grand Prix. Here’s eight things you may not have known about Formula 1’s most glamorous destination.

Monaco is a constitutional monarchy with Prince Albert II as head of state. One of only three sovereign city states in the world, alongside Singapore and Vatican City, the tiny tax haven on the Mediterranean coast measures just 2.02 square kilometres (0.78 square miles) and is home to 38,000 high net worth individuals, including many current and past F1® drivers.

The Monaco Grand Prix was first staged in 1929 on a layout of the circuit that was not very different to the one used today; it wasn’t until Jackie Stewart’s safety campaign in the late 1960s and early 1970s that modifications were made to the circuit to improve safety, such as the addition of Armco barriers. Monaco is one of four current circuits that were part of the first World Championship season in 1950. The others are Silverstone, Monza and Spa-Francorchamps. The race has been held continuously as part of the Formula 1® World Championship since 1955.

The Shortest and Tightest Circuit on the F1® Calendar

Circuit de Monaco was famously described by Nelson Piquet as like “riding a bicycle around your living room.” Measuring just 3.34km (2.07 miles), the tight and twisty layout of F1’s shortest circuit presents a real challenge for today’s Formula 1® cars and drivers. Overtaking is extremely difficult, which makes a good qualifying position even more important.

Ayrton Senna famously arrived on the F1® scene with a storming performance in the rain-shortened 1984 Monaco Grand Prix, in which he took second in the unfancied Toleman behind Alain Prost. Senna would go on to win six times in the principality, the most of any driver, including five straight victories from 1989-1993. Other successful drivers in Monaco include Graham Hill (known as the “King of Monaco”, or simply “Mr. Monaco”) and Michael Schumacher, each with five wins to their name. McLaren is the most successful constructor in Monaco, with 15 wins.

Although almost 40,000 people live in Monaco, only around 5,000 residents are locals, or Monégasque. The tiny principality has produced four drivers over the years; Louis Chiron, André Testut, Olivier Beretta and Charles Leclerc. Chiron won the 1931 non-Championship Monaco Grand Prix and also holds the record for being the oldest driver to enter a Formula 1® race. He was 55 years, 292 days old when he finished sixth in the 1955 Monaco Grand Prix! Will Charles Leclerc win his home race in the coming years? Many observers are tipping the Monégasque driver for big things.

The Monaco Grand Prix forms part of the so-called “Triple Crown” of motorsport, along with the Indianapolis 500 and 24 Hours of Le Mans. Just one driver, Graham Hill, has managed to achieve the Triple Crown to date, but Fernando Alonso has his sights set on this unique motorsport prize. Alonso, a two-time Monaco Grand Prix winner, will race for Toyota in next month’s 24 Hours of Le Mans and has already had one, unsuccessful attempt at the Indianapolis 500, which is traditionally held around the same weekend in late May as the Monaco Grand Prix.

Diamonds are (not) forever

To promote the star-studded film “Ocean’s 12” in 2004, the Jaguar team ran a special livery at the Monaco Grand Prix, complete with precious diamonds attached to the nosecones of the cars. On lap one, the Jaguar of Christian Klien hit the barriers and retired from the race. The team was unable to recover the car or even examine the crash site until the race finished two hours later, and of course the $300,000 diamond was nowhere to be seen! “That will be the most expensive drive I’ll ever take around Monte Carlo,” said Klien after the race.

Monaco holds several records for the fewest number of finishers in a Formula 1® race. In 1966, just four cars were classified (from 16 starters) while only three cars crossed the finishing line in 1996 (though seven were classified). The 1996 Monaco Grand Prix was won by Olivier Panis, in a Ligier, who started 14th on the grid and drove a storming race in wet conditions to take his one and only race win. Even though today’s cars are much more reliable mechanically than those of twenty or thirty years ago, the tight confines of the circuit are still hard on the cars’ brakes and gearboxes and the barriers invariably catch out several drivers each race, especially those trying to pass a slower car in front!